On November 4, 2017, I was looking for  writing inspiration and decided to look and see what I was doing a year ago that day by looking at my Facebook history. I knew that November, 4, 2016 was the tail-end of my second run for office, just four days before the vote. But I forgot that Facebook would also feed me posts from years prior… including 2014 when I made my first run. That time, November 4 was voting day itself, and I have wonderful pictures of all of us voting, hopeful that I would win.

The coolest thing? This was the first election that my eldest son had ever voted in,  and his mom was on the ballot! 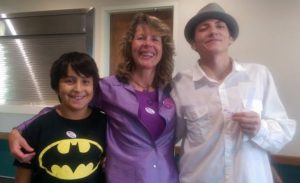 When I first decided to run for the board of directors of our local public utility district I had all sorts of sensible reasons. I could serve my community, get involved, support our floundering recreation department, stir a little change, etc, etc. I was completely new to politics and campaigns and learned as we went along.

Once the campaign got going some incredible secondary benefits appeared. A day or two after our signs started going up, my then-twelve-year-old came home from school and said, “Mom, the kids at school say you are running for president.” What fun! That was the moment I realized how my decision was impacting my kids, in a good way. I imagined my boys as two fully-grown men, sitting over a couple of beers one day and saying, “Remember that time that mom ran for office?” Pretty wonderful. I knew that what I was doing would affect their civic involvement for the rest of their lives.

After the 2014 election, when people asked me if I won, I struggled with an answer. I finally settled on something like: “Yes, I won. I did not get enough votes to win the seat, but my kids got to watch me run for office and my oldest got to vote for me the very first time he voted at all. I call that a win.”

“Sarah is a marvelous proofreader and editor.  Not only was she able to find typos and word-choice errors that others missed, but she also was able to make suggestions for meaning and clarity. I really appreciated her work on my bestselling book – and I’ll use her again!”  Paul Hoyt,  Author and Mentor to CEOs and Entrepreneurs